The Now: What is Lab-Grown Meat?

Lesson 9: What is Lab-Grown Meat?

What is lab-grown meat? 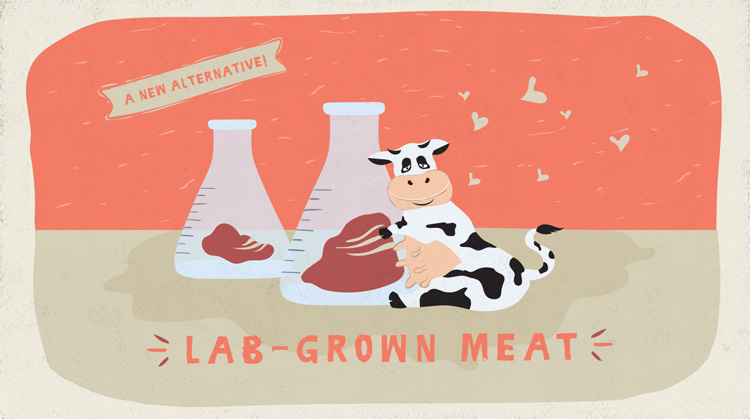 For as long as we can look back in history, people have been eating meat. We've always taken it for granted that meat comes from animals, but science has recently found a way to change this. It's now possible to grow meat in a lab, entirely outside of an animal's body. This is known as lab-grown meat, or cultured meat. But will it actually make factory farms obsolete?

How is lab-grown meat made?

Compared to terms like free range and farm raised, lab grown leaves a lot to the imagination when it comes to how the cultured meat is made, but it’s not as scary as it sounds. Take a cow for example. Scientists will use a cow’s stem cells, the building blocks of muscle and other organs, to begin the process of creating the cultured meat. The cells are placed in petri dishes with amino acids and carbohydrates to help the muscle cells multiply and grow. Once enough muscle fibers have grown, the result is a meat that resembles ground beef.

Watch the video below to learn more about how lab-grown meat is made.

By definition, a vegan diet does not include consuming meat or any form of animal products. For this reason, lab-grown meat would not be considered vegan because the ingredients needed to produce the synthetic meat are all derived from animals.

What do vegetarians think about cultured meats? Many are still on the fence. Lab-grown meat sort of circumvents the ethical issues of eating meat because it doesn’t require any animals to be slaughtered. It is still meat, though, which is the main concern for many vegetarians. Some say they're interested in trying the new synthetic meats, but others still find animal tissue (whether or not it's grown in a lab) unappetizing enough to pass on an artificial beef burger.

Aside from the ethical implications of lab-grown meat, members of the Hindu, Muslim, and Jewish faiths question whether cultured meat is in accordance with their religious beliefs, and therefore acceptable to consume.

How much will lab-created meat cost?

The first lab-made hamburger was created in 2012, and it cost about $325,000 to produce. But as technology advances, the cost to produce cultured meat should continue to decrease.

During an interview on an Australian radio show, Dutch startup Mosa Meat estimated that the price could be $80 per kilogram if they’re able to reach large-scale production. This would mean that a 5-ounce burger would cost slightly more than $11.

It's too soon to say what the environmental impact of producing lab-grown meat will be, but it is already appearing to be much more eco-friendly. Compared to conventional beef, lab-grown beef requires 45% less energy use, 99% less land use, and produces 96% fewer greenhouse gas emissions.

Are other types of meat being made in labs?

In addition to lab-grown beef, cultured chicken and duck products are in the works. Scientists are also experimenting with the same process of cell agriculture to produce milk, eggs, and leather.

What about plant-based meat?

Plant-based meat is not the same as lab-based meat. Instead, it replicates the taste and texture of actual beef, sausage, and other meats without using any animal products. They achieve this by using special recipes and cooking procedures. For instance, one company ferments genetically-engineered yeast to create heme, a protein that's crucial to duplicating the juiciness, flavor, and color of real meat.

Unlike lab-grown meat, most plant-based meats are considered vegan. If you want to try plant-based meat for yourself, the two biggest brands (Impossible Foods and Beyond Meat) are available at select supermarkets and restaurants across the US.

When will lab-grown meat be available to buy?

The scientists behind the production of lab-grown meat haven’t been able to make any promises about when it will be available at your local grocer, although some hope cultured meat products will hit shelves by 2021.

However, the startup companies producing lab-grown meats admit that it’s likely to take several more years before production costs are reduced and cultured meats are available for consumption by the public at large.