What is a semicolon?

A semicolon is a punctuation mark that looks like a combination of a period and a comma, like the one here (shown in red):

They are mostly used in poems, speeches, and academic writing. You probably won't see or use semicolons very often. But knowing how to use semicolons will help you to understand them if you do see them. It will also give you the option of using them in your own writing.

There are two ways you can use a semicolon:

You know that we usually use periods between two complete sentences. A semicolon is a little different. It tells the reader that you're at the end of a thought, but that there's another part to it. So a semicolon means that two sentences are connected. Let's take a look at this example:

The writer used the semicolon to tell us that these two sentences are connected. He or she was insulted because someone said his or her accent was awful. Of course, we probably could have figured that out even if the writer had used a period. The semicolon just makes it extra clear.

Let's look at another example:

This writer wants to make sure readers notice that these thoughts are connected. The car won't run because this guy decided to fix it on his own.

You can also put semicolons between items on a list. You're probably thinking that's what commas are for, and that's usually true. But what about this example?

This sentence has a list in it, but it's a little difficult to read. Can you tell how many people are listed in the sentence? It could be these people:

Now it may seem obvious to you that the people you just saw are the people in the list. But the same sentence could also be describing this group:

Now we know where each item on the list begins and ends. So the list only has three people in it: Jerry, Serenity, and Alex.

Remember not to put a semicolon after the last item in the list. A semi-colon in a list should only come between items.

Two of the commas in the sentence below should be semicolons. Use what you just learned to decide which commas to change, and click the dots to see if you're right! 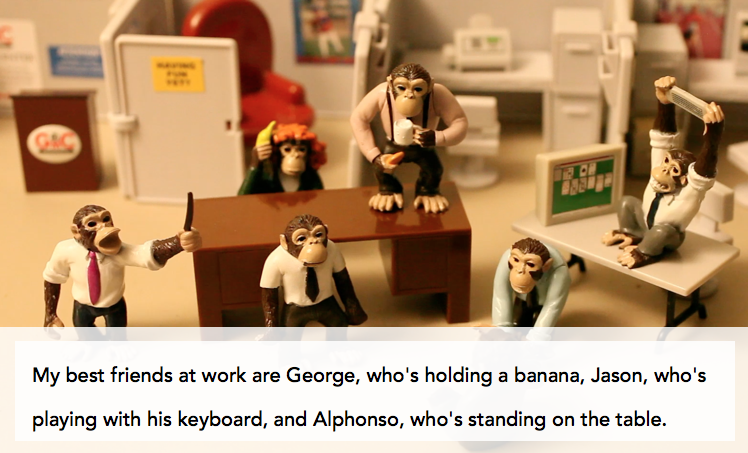 Jason and who's playing with his keyboard are both part of one item on the list. So they shouldn't have a semi-colon between them

This is not the end of the list item that tells you about George, so it is not the right place for a semi-colon.

Putting a semi-colon here tells your reader that you are separating between the list item about Jason and the item about Alphonso. So this is the right place for a semi-colon.

This is the end of an item in the list, so it's a good place for a semi-colon.

Previous: I, Me, and Other Pronouns
Next:Quotation Marks