Grammar: I, Me, and Other Pronouns

Lesson 6: I, Me, and Other Pronouns

What is a pronoun?

However, you can't just use the pronoun she every time you're talking about Miranda. Take a look at this example:

That might sound wrong to you—it is. In the first sentence, Miranda is the one doing the action (bragging). This means she's the subject of the sentence. And she is a pronoun that can replace subjects.

In the second sentence, though, Sam is doing an action to Miranda (stealing). This makes her the object of the sentence. The word she can't replace the object of a sentence. That's why it sounds wrong in this example.

Most of the time, you'll know if a pronoun sounds right or wrong. For example, you can probably tell that this sentence is correct:

If you aren't sure which pronoun is right, here's a chart that tells you which pronouns can replace subjects and which can replace objects. In our last example, her is the right pronoun to replace Miranda because she's female and the object of the sentence.

Notice that you and it can replace subjects or objects, so sentences like You should buy it and It looks nice on you are both correct.

It's important to use the right type of pronoun when you speak or write. For example, you wouldn't say Him needs to buy broccoli, or Sam wrote a letter to she. If you do, people might be confused about who is doing what in your sentence.

It's not always so easy to tell which pronoun to use. For example, people are often not sure if they should say Sam and me stole money or Sam and I stole money.

Here's a way to make sure you're using the right pronoun in these situations. If you have a pronoun and a noun together, try reading the sentence with just the pronoun. 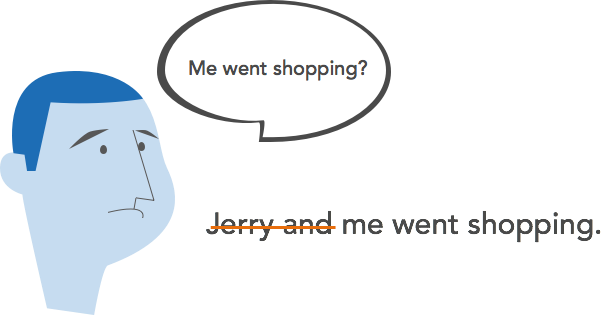 If the sentence sounds funny, you'll know you need to change the pronoun. 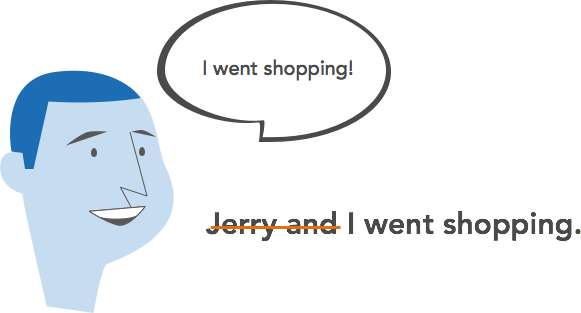 This sentence has two pronouns, so we'll need to check both of them. First, we'll try the sentence with just the pronoun him. Sierra made fun of him sounds right, so the pronoun him is correct. Now we'll check to see if I is correct.

Sierra made fun of I sounds wrong, so we have to replace I with me. Now we know that this sentence is correct:

One of the sentences in this picture has a correct pronoun, and one has an incorrect pronoun. Use the trick you just learned to decide which pronoun is correct. Then click the dots above the pronouns to see if you're right! 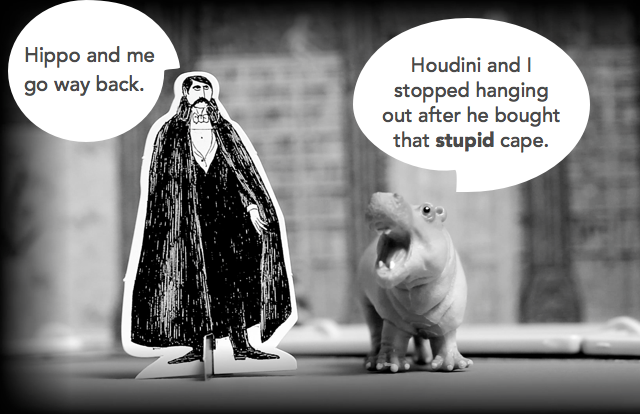 Since you wouldn't say Me go back, this is the wrong pronoun for this sentence. The magician should change his pronoun to I.

Since you could say I stopped hanging out, this pronoun is the right one for this sentence.