What is a run-on sentence?

When you speak, you pause between sentences to let people know where each sentence ends. In writing, periods are like this pause. The pause can also be a question mark or an exclamation point. When two sentences are next to each other without any punctuation marks between them, you have a run-on sentence.

Run-on sentences are a problem because they make it difficult to tell where one sentence ends and the next one begins. As you can see in the picture below, writing without periods is like speaking very fast without stopping. Both are difficult to understand! That's why it's so important to fix run-ons in your writing.

How can you recognize a run-on sentence?

If you don't signal when your sentence ends

In the example above, the horse's speech actually has four complete sentences in it. But they don't have periods between them, which makes this example a run-on. To fix this, you need to find the end of each sentence and mark it with a period, question mark, or exclamation point.

You can do this by reading the run-on sentence out loud to yourself. Put periods in places where you stumble or pause while you're reading. Then look at each period and ask yourself: Is this sentence really over? Did it start in the right place? Check to make sure all of your sentences make sense and that there aren't any words left out. Then you'll know you've fixed the run-on sentence.

If you correct the horse's run-on sentence, you'll end up with something like this:

If two complete sentences are joined by a comma

Commas in writing are like taking a quick breath in the middle of a thought or a sentence. They don't signal the end of a sentence. If two complete sentences are separated by a comma instead of a period, it's a run-on sentence. Let's look at an example:

In this example, My clothes dryer isn't working is one complete sentence, and my clothes smell like mildew is another. This makes this example a run-on sentence. You can fix run-ons like this by replacing the comma with a period. Make sure to capitalize the letter after the period, as we've done here:

Here's another example of this kind of run-on sentence:

You can correct this example by adding a period: Fruit in that store is usually rotten. You really shouldn't shop there. Don't confuse this kind of run-on sentence with correct sentences like this:

When sentences are just too long

Sometimes sentences have the right punctuation, but they're just too long to be easy to read. These sentences are also run-on sentences. Here's an example:

You can fix run-ons like this by splitting them up into complete sentences, just like we did with the other run-ons in this lesson. You can also take out details that don't help people understand the writer's main point. In our example, information about the other cashier singing is important. Without these details, we won't understand why the writer is grouchy. But we don't really need to know about the characters in the cartoon.

You can also take out words and facts that repeat something the writer has already said. For example, we probably don't need to know that this person is crazy, angry, and grouchy. We'd understand if the writer just used the word grouchy.

To correct sentences that are too long, you'll usually want to do all three of these things. Here's how we fixed the long sentence in our example. Click the dots to see how we decided what to take out.

We took out these words because they seemed obvious. If this writer is blaming his/her bad mood on Emily and her singing, it's probably because the writer thinks that's true, right?

It's probably not important to know that Emily sits at the next cash register. It's enough to know that she's the writer's co-worker and that she was probably being annoying at work.

We re-worded this part of the sentence to make it shorter. We left the exploding chicken in because it seems like the writer was making a joke. He or she will explode just like the chicken if Emily doesn't stop singing. Notice that we also split the example into two sentences here by putting a period after chicken.

As we said in the lesson, we don't need all these words to understand how the writer is feeling. The word grouchy is enough for us to get it.

We took out the part about the little boy because it really isn't needed to understand what's going on. That part of the sentence would work if the writer was mainly talking about the cartoon. But most of this sentence is about how annoying Emily's singing is.

Here's what our example looks like after we've edited it:

There are actually many different ways we could have corrected this sentence. As long as you end up with sentences that follow grammar rules, are easier to read, and stick to the main idea of the original sentence, your version is correct.

Is it OK to use run-on sentences?

It is almost never a good idea to use run-on sentences in writing. Writers and poets sometimes use them to repeat something important or to imitate the way people talk. But run-on sentences are usually incorrect. They make it too difficult to understand your writing.

Here's a run-on sentence that contains three complete sentences. Click the dots where you think the periods should go. 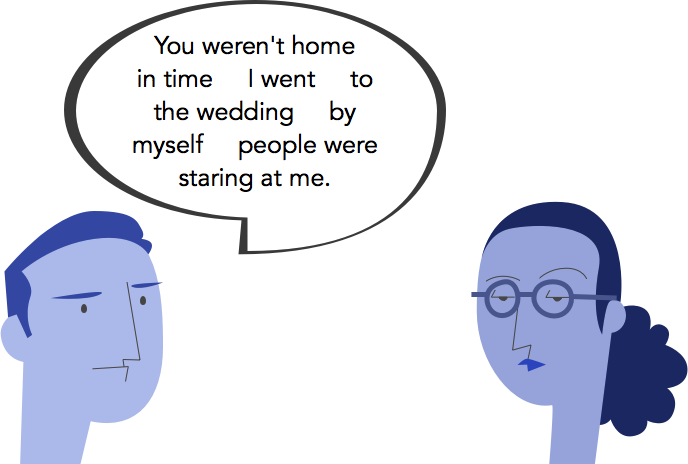 This is the end of the first sentence in this run-on. Notice how the next word switches to talk about a new person: I. That's a hint that a new sentence is starting.

Putting a period here signals that this is the end of the man's thought about going to the wedding. Now he will switch from talking about what he did to what people at the wedding did. That will be a new sentence.

Previous: Sentence Fragments
Next:I, Me, and Other Pronouns