What are quotation marks?

Quotation marks are a type of punctuation you use to show that you're quoting what someone else said. Whenever you use quotation marks, you're showing exactly what someone said or wrote. For example, take this sentence:

We used quotation marks to repeat what Harry said. In other words, we quoted Harry. Because we used his exact words, it was a direct quote. Here's another direct quote:

The sentence I've got a feeling we're not in Kansas anymore has quotation marks before and after it because it's a direct quote from Dorothy.

Where does the comma go?

In our last example, you can see that there's a comma between the words anymore and said. The comma is there to separate the quote from the tag—the phrase that tells us who's being quoted. In that example, said Dorothy is the tag. Because the quote is before the tag in this case, we put the comma before the tag too. Let's take a look at another example:

Remember how we said the comma belongs between the quote and the tag? This tag has a direct quote on both sides, so it has commas on both sides too. What about this sentence?

As you probably guessed, because the quote comes before the tag in the sentence the comma does too. But what about a sentence like this?

This sentence has a tag in the middle of it. But the first part of the quote has a question mark at the end, so we can't put a comma there. When a quotation ends with a question mark or exclamation mark, you don't need a comma before the tag—just put a period after the tag, like we did in this example.

Where does other punctuation go?

Sometimes people have trouble knowing where to put punctuation marks if they're next to quotation marks. For instance, can you tell which of these sentences is correct?

If you chose the blue sentence, you're right. But if you weren't sure, here's a simple rule to help you figure it out. A punctuation mark next to a quotation mark usually stays next to the word right before it. If that word is inside the quotation marks, the punctuation mark should be inside too, like in this example:

The only exception to this rule is when someone says something about a quote. For instance, if my friend has been insulted, I might write, Did she really say, "You're an idiot"? The question mark outside of the quotation marks shows that the question is part of what I'm saying, not part of the quote.

Use the rule you just learned to figure out where to put the comma in this sentence. Then click the dots to see if you're right! 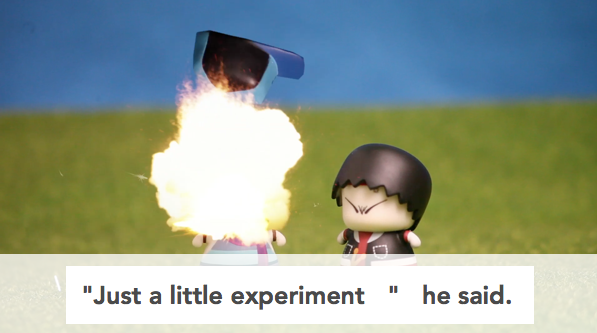 There are two kinds of quotation mark mistakes that people all the time:

One common mistake is using quotation marks when the writer gives you the basic idea of what someone else said, but not in that person's exact words. We call this using an indirect quote. Indirect quotes don't get quotation marks, as you can see in our examples here: 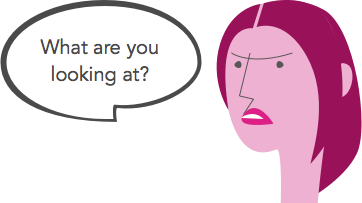 Both sentences at the bottom of the picture tell the reader what Julie said, but only one of them uses her exact words. You can see that the indirect quote doesn't use Julie's words, so no quotation marks are needed. Let's take a look at another example:

Using quotation marks to emphasize certain words or phrases is another common mistake. Remember, you can use scare quotes to show that you don't believe something. For instance, if you don't like your mother's cooking, you could say:

But if you use quotes to emphasize something, people will think you're using scare quotes. For example, take a look at this sentence:

The writer might be using quotation marks to make the word murdered stand out. This is incorrect—but it's also confusing. Readers will probably think that the policeman thinks the man wasn't murdered.

Using quotation marks to make words stand out is such a common mistake that there are entire blogs about it! Take a look at this blog to see some funny examples.