OS X Basics: Using a Windows Keyboard With a Mac

Lesson 14: Using a Windows Keyboard With a Mac

Using a Windows keyboard with a Mac

Why use a Windows keyboard?

One of the main reasons you might choose to use a Windows keyboard on a Mac is that it's more readily available. In most stores, you'll find that there are more Windows keyboards than there are Mac keyboards. You may also have one lying around the house from an older computer.

Some people simply prefer to use Windows keyboards. Perhaps you recently switched from a Windows computer to a Mac and you prefer the feel of your old keyboard. There's also a variety of custom keyboards available, with most of them made for Windows machines.

What are the main differences?

Although Windows and Mac keyboards feature most of the same keys, there are a few that differ. When using a Windows keyboard on a Mac, the Windows key is used instead of the Command key, and the Alt key is used in place of the Option key. For example, the Undo shortcut would use Windows+Z instead of Command+Z. It's also worth noting that their positions are reversed on the two types of keyboards.

Setting up a Windows keyboard

To use a Windows keyboard, simply connect it to your Mac (if it's a Bluetooth keyboard, your Mac should recognize it when you turn on the keyboard). You should be able to use it as soon as it's connected. You may be greeted with a Keyboard Setup Assistant prompt like the one in the image below. This is just the computer's way of identifying the keyboard; simply follow the onscreen directions. This only takes a minute or two, and then you'll be all set! 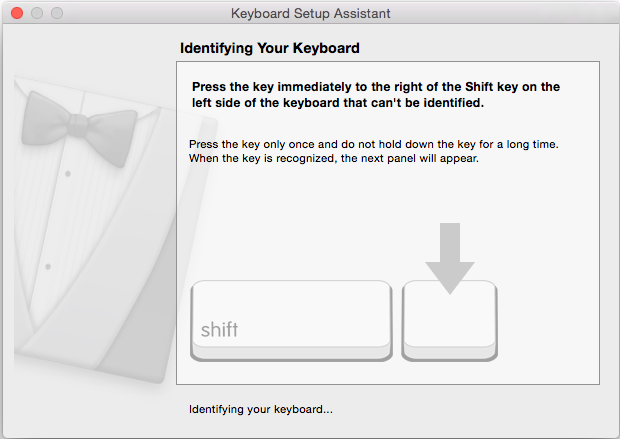 If you've recently switched keyboards, using shortcuts can be frustrating. Some modifier keys are arranged differently, which can be difficult to get used to. For example, if you're used to pressing Command+Z, this same typing movement would be Alt+Z on a Windows keyboard.

Luckily, Macs allow you to remap your keys. This means you can change the function of the keys so when you press one key, it's actually performing the action of another. For example, you can set it so that the Alt key will act like the Command key when pressed. To learn how to remap your keys, read this article from 9to5Mac.