To use your iPad, you'll need to understand the basics of iOS, the operating system for the iPad (and also the iPhone). You'll see it when you turn on your iPad for the first time. iOS is what powers the iPad's hands-on features, including the multitouch screen, easy-to-use interface, and built-in apps. In short, it's what makes the iPad work the way it does. 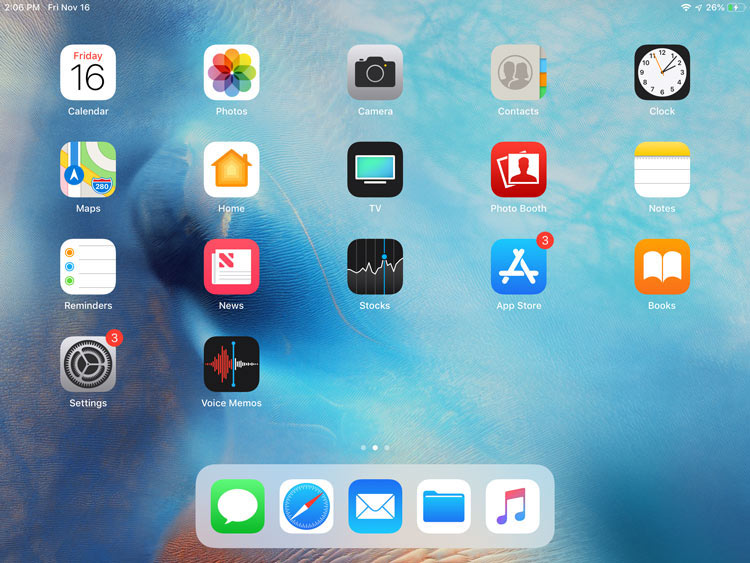 The status bar at the top of the screen displays current information about your iPad. This includes the status of your Internet connection, the time, and your remaining battery life.

The dock at the bottom of the screen is designed for your most frequently used apps. By default, it includes Safari, Mail, Photos, Music, and Files. You can customize the Dock by adding or removing icons so you always have access to your favorites.

The screen you see here is called the Home screen; however, it may help to think of it as similar to your computer desktop. It's where all of your apps are kept, and it's the first thing you see when you turn on your device. You can even have multiple Home screens to make room for more apps and to organize icons. To navigate between screens, swipe left or right.

The icons you see here are shortcuts to your apps. In this example, the icons represent some of the built-in apps that came with iOS. If you choose to download more apps, the icons will appear here too. To open an app, simply tap the one you want.

Gestures, sometimes called multitouch gestures, are what you'll use to open apps, navigate online, and more.

Even if you're new to the iPad, you've probably heard of apps before. The concept is simple: Apps are programs that are designed to run on your device.

The iPad comes with several built-in apps that you can access immediately from the Home screen. They're a great place to start for new users because there's nothing to download or install. Many of these apps are ready to use right out of the box (like the Camera app), while others require a little more setup (like Mail and Contacts). We'll take a look at some of the built-in apps later in this tutorial.

Now that you know the basics of using iOS, it's a good idea to become more familiar with some of its more useful features. You can access these features at any time, no matter what app you're currently using.

Notifications are pop-ups, banners, and other audio and visual cues that work with the apps on your device. They're designed to let you know when something needs your attention, or when there's been any recent activity (for example, on Facebook).

The Control Center allows you to quickly access frequently used settings for your device, as well as a media panel with playback controls. Just swipe down from the top-right corner of the Home screen to access the Control Center.

Click the buttons in the interactive below to learn about the different parts of the Control Center. 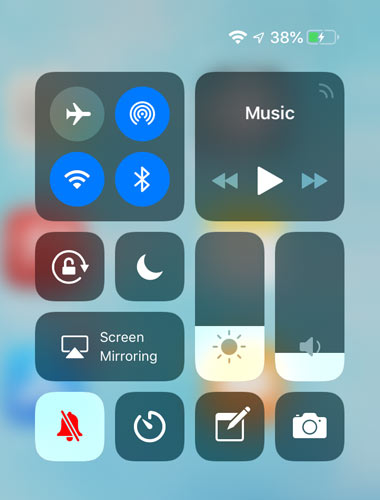 Toggle this option to turn AirDrop on and off, which allows you to share photos, locations, and more with other Apple devices near you.

Use this option to adjust the iPad's screen brightness.

Use this option to adjust the iPad's volume.

Toggle this button to quickly mute or unmute your iPad.

Siri is a useful feature that comes with all current versions of the iPad. Sometimes referred to as a virtual assistant, it can help you with all kinds of things. For example, you can use Siri to send messages, schedule meetings, and search for nearby restaurants. Powered by the sound of your voice rather than gestures or your keyboard, Siri can understand and respond to complex requests like Remind me that I have a doctor's appointment on the 18th or What's the weather like today? 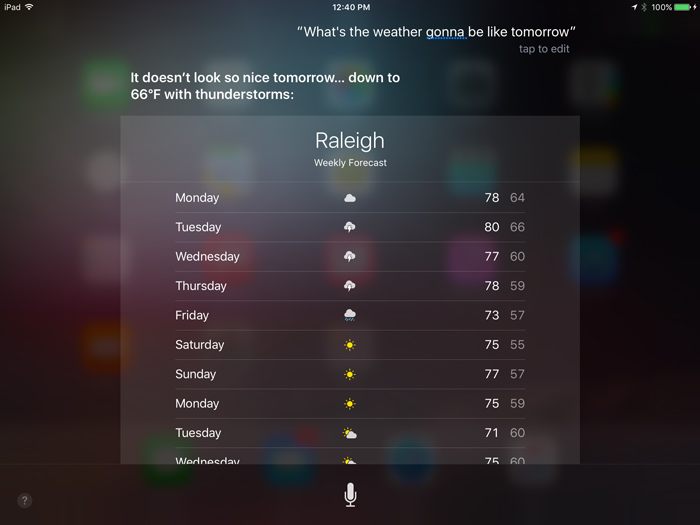 Voice dictation allows you to enter text without having to use the keyboard. To use voice dictation, tap the microphone icon on your keyboard, then start talking. The iPad will listen to what you say and try to transcribe it. You can even add punctuation by saying words like period or question mark when reaching the end of a sentence. When you're done, tap the microphone icon again and your words will be converted to text.

Sharing is also a big part of using the iPad. To help you stay connected, Apple has created a feature called the Share button that can be found in many of its apps.

Just tap the Share button whenever you see it, and you'll see several options. You can share photos, videos, and much more across a variety of networks—including email, instant messaging, Twitter, and Facebook. You can even print photos or documents if you have a wireless printer in your home or office. 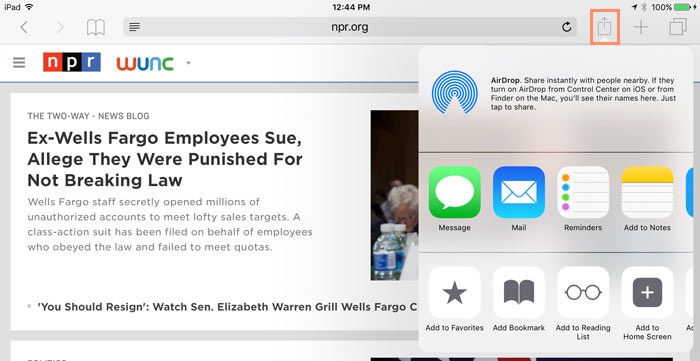 Syncing makes it easy to keep things up to date between your computer, your iPad, and your other mobile devices. This way, you'll always have access to important files on any device whenever you need them. There are two ways to sync an iPad:

We'll take a closer look at syncing in our lesson on syncing your iPad.

Previous: Getting Started with the iPad
Next:Using the Keyboard