A negative is a word or phrase that shows you reject or disagree with something. We use negatives all the time in regular conversation, so a lot of these words should be familiar to you.

Can't, don't, and won't are all common negatives (as well as isn't, doesn't, and not). Words like never and nobody are negatives too—they just express disagreement in a different way. 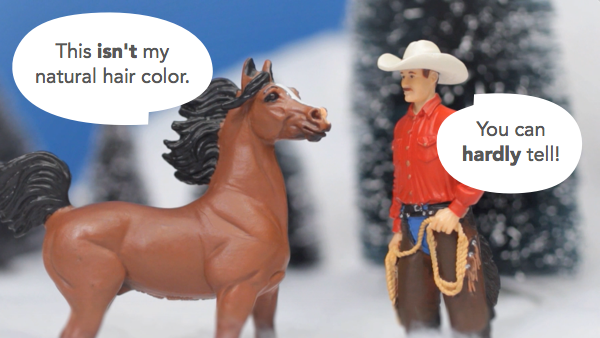 Negative doesn't necessarily mean that something is bad or that you have a negative attitude. It just means you're negating something—in other words, stating that the opposite is true. You could be referring to anything: good or bad, pleasant or unpleasant. It might help to picture it this way:

Many negatives are simply the opposite of words we already know. When writing a negative, start with a basic verb, then add the word not. You can write the words separately or as a contraction.

To use a negative in a sentence, place it in front of an idea—specifically another verb, noun, or adjective. This is how you tell the reader exactly what you're referring to (and more importantly, what you're trying to negate).

See how the words above work together to give the sentence meaning? Don't refers to lick, and not refers to sanitary. Imagine what the sentence would look like without any negatives:

Lick the floor; it's sanitary.

Not only is that gross, but it also means the opposite of the original sentence. It still makes sense (sure, you could lick the floor if you wanted to), but without don't and not, the message isn't the same.

We use negatives like can't and won't because they're so familiar, but the truth is that there are many ways to write a negative sentence. For instance, have you ever simply said no to reject or disprove something? 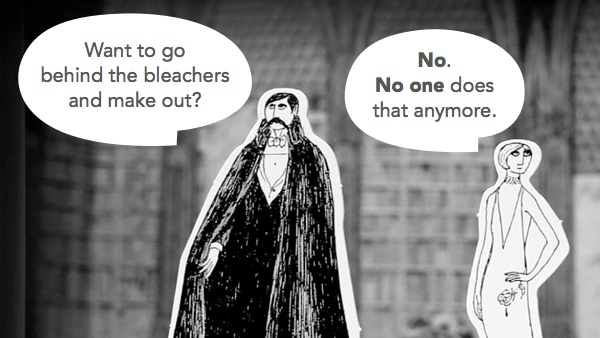 Lots of words have opposites, like yes/no, and everyone/no one. Many opposites even include the word no somewhere in the spelling, which makes them easy to remember.

Some negatives don't sound like negatives because they don't include the words no or not. Take unhappy, asymmetrical, nonsense, and dislike. All of these words have a negative prefix that changes the meaning from one thing to another. Negative prefixes include a-, dis-, il-, im-, in-, ir-, non-, and un-.

The words neither/nor can also be used to form a negative. (They're the opposite of either/or.) Use them to negate or reject two or more things at once. In a sentence, they look like this:

Neither/nor and either/or can't be used interchangeably. For example, you wouldn't say I'm neither happy or sad. That might sound correct, but it's not quite right. Neither and nor go together because they're both negatives—you can't mix and match. It might help to remember that they both start with the letter n.

Words like hardly, seldom, rarely, and never can be used to negate things in a different way. Unlike don't and won't, they have different degrees of meaning. Take the example below. Notice how the meaning of the sentence changes depending on the negative, from absolute to something more open-ended.

A double negative occurs when you use more than one negative in a sentence. Funnily enough, this changes the meaning of the sentence so it's no longer negative at all—it's affirmative instead.

Some double negatives are intentional, like in the example above. When the man answers I can't NOT look at it, he means his friend's mole is impossible to avoid. In order words, yes: He is looking at the mole. The double negative is being used for comedic effect.

Some double negatives are unintentional, however. This can be confusing and can even make the sentence difficult to read. Chances are people will still understand what you're talking about, but they might think something sounds a little off. 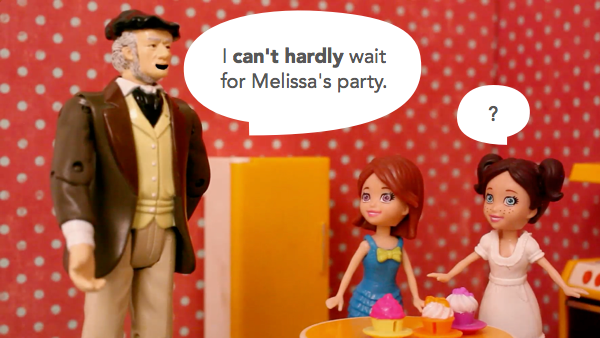 If you find yourself using a double negative, ask yourself: Is it intentional? Will the reader understand what you're trying to say? If it changes the meaning of the sentence to something you don't want, you can take one of the negatives out or change it to a positive. This should help you avoid any confusion.

Some people will tell you that double negatives are bad and that you should never use them. This isn't necessarily true. In the right context (for example, stylized writing or conversation), they can be used to convey subtlety, hesitation, or even a certain attitude.

What about ain't? It's used in many parts of the United States as a play on words, like aren't, isn't, and am not. Because ain't is a slang term, it's best to avoid using it in formal writing (like an academic paper or work email)—the reader might think you're not taking the subject seriously. In conversation and casual writing, however, ain't is often OK. 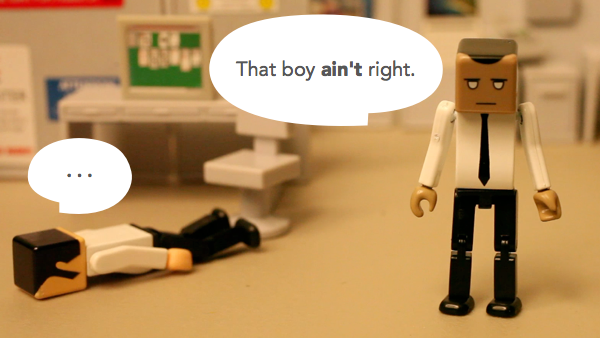 As you just learned, there are many ways to form a negative. See if you can spot the negatives below, and click the yellow dots to learn more. 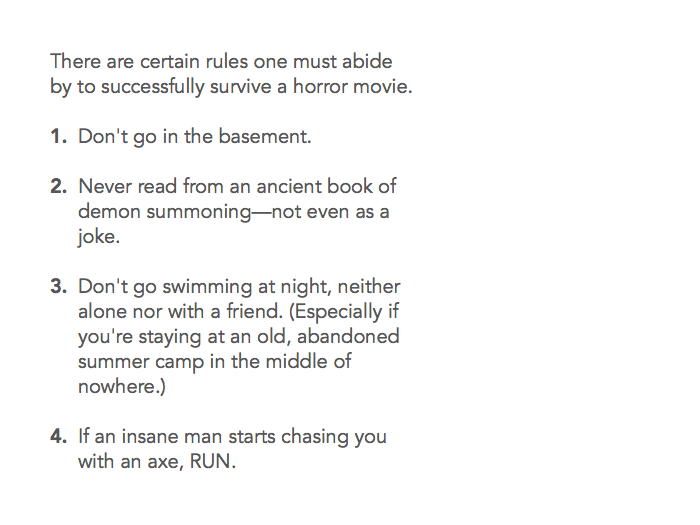 Here's an example of neither/nor. (Nowhere and don't are negatives too.)

Remember, you can't mix and match neither/nor with either/or. If you wanted to use or instead, you could go with something like this:

Swimming at night—either alone or with a friend—is a good way to get axed in a horror movie.

In this sentence, never and not are both negatives. You could phrase the sentence a different way (starting with don't read, or shouldn't read), but it wouldn't have the same power as never read.

That's what makes words like never and rarely so useful—they let you be more descriptive when don't simply isn't enough.

Don't is the negative in this sentence. It refers to going into the basement (a bad idea in any scary movie).

If you wanted to phrase the sentence another way, you could also say:

I wouldn't go into the basement.

It would be unwise to go into the basement.

Under no circumstances should you go into the basement.

Insane is the negative in this sentence. It's the opposite of the word sane. (Remember, in- is one of many prefixes that can be used to change a word into a negative.)

Other negatives that could be used here include irrational, unsound, or unhinged.

You could also use the word crazy, but that's not actually a negative (notice that there's no negative prefix). The word just has a negative connotation.