A function is a predefined formula that performs calculations using specific values in a particular order. All spreadsheet programs include common functions that can be used for quickly finding the sum, average, count, maximum value, and minimum value for a range of cells. In order to use functions correctly, you'll need to understand the different parts of a function and how to create arguments to calculate values and cell references.

Watch the video below to learn more about using functions in Excel.

The parts of a function

In order to work correctly, a function must be written a specific way, which is called the syntax. The basic syntax for a function is an equals sign (=), the function name (SUM, for example), and one or more arguments. Arguments contain the information you want to calculate. The function in the example below would add the values of the cell range A1:A20. 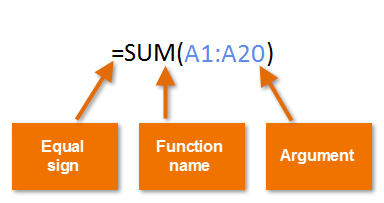 Arguments can refer to both individual cells and cell ranges and must be enclosed within parentheses. You can include one argument or multiple arguments, depending on the syntax required for the function.

For example, the function =AVERAGE(B1:B9) would calculate the average of the values in the cell range B1:B9. This function contains only one argument. 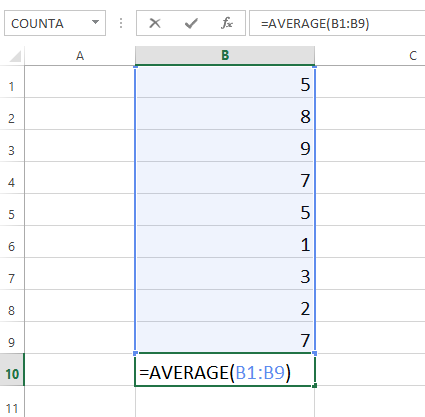 Multiple arguments must be separated by a comma. For example, the function =SUM(A1:A3, C1:C2, E2) will add the values of all cells in the three arguments.

There are a variety of functions. Here are some of the most common functions you'll use:

To use a function:

In our example below, we'll use a basic function to calculate the average price per unit for a list of recently ordered items using the AVERAGE function.

Your spreadsheet will not always tell you if your function contains an error, so it's up to you to check all of your functions. To learn how to do this, check out the Double-Check Your Formulas lesson.

If you want to learn how a function works, you can start typing that function in a blank cell to see what it does.

You can then type an open parenthesis to see what kind of arguments it needs. 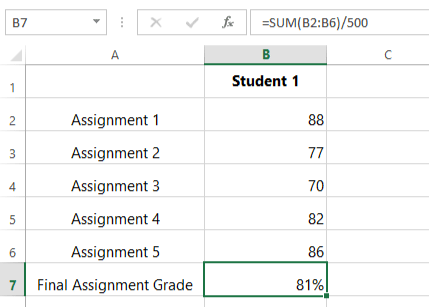 Let's take a look at a more complicated example that uses multiple functions:

There are many other functions you can use to quickly calculate different things with your data. Learning how to use other functions will allow you to solve complex problems with your spreadsheets, and we'll be talking more about them throughout this tutorial. You can also check out our articles below to learn about specific functions: