Millions of people use Microsoft Excel to organize and calculate data. And because Excel is popular around the world, it's available in many different languages and versions. However, there are also many regional differences when it comes to certain tasks in Excel, including separating arguments, writing numbers, and function names.

For example, we use the U.S. English version of Excel in our Microsoft Office tutorials, so you may notice that some things work slightly differently in your version. Let's take a look at some of the most important things that can vary if you're using Excel in another language or version.

In many versions of Excel—including the U.S. English version—arguments in a formula are separated by a comma, as in the example below:

But in many countries, arguments must instead be separated by a semicolon, like this:

There are many ways to write out various numbers and dates, and their format will vary depending on your region. For example, in the United States, decimal numbers are written with a period, as in the example below:

But in many countries, decimal numbers are written with a comma, like this:

There is a similar type of variation with numbers that use the thousandths place. In the U.S., this is typically written with a comma, like this:

You'll typically need to use the standard formatting in your country when entering values like this in Excel. The same is true for calendar dates. For example, dates in the U.S. are usually written as month/day/year. For example, May 25, 2016 would be written like this:

But in most countries, it will typically be written as day/month/year, like this:

Excel has hundreds of functions to perform different types of calculations. However, the exact name of any function will depend on your computer's language settings. For example, the SUM function is written as SOMME in French, SUMME in German, and SUMA in Spanish. Check out some of the resources below to learn more about language-specific function names:

To view and modify language settings:

To view or modify your language settings within Excel, go to File > Options > Language. From there, you can see what language you're currently using, add a new language, and more. 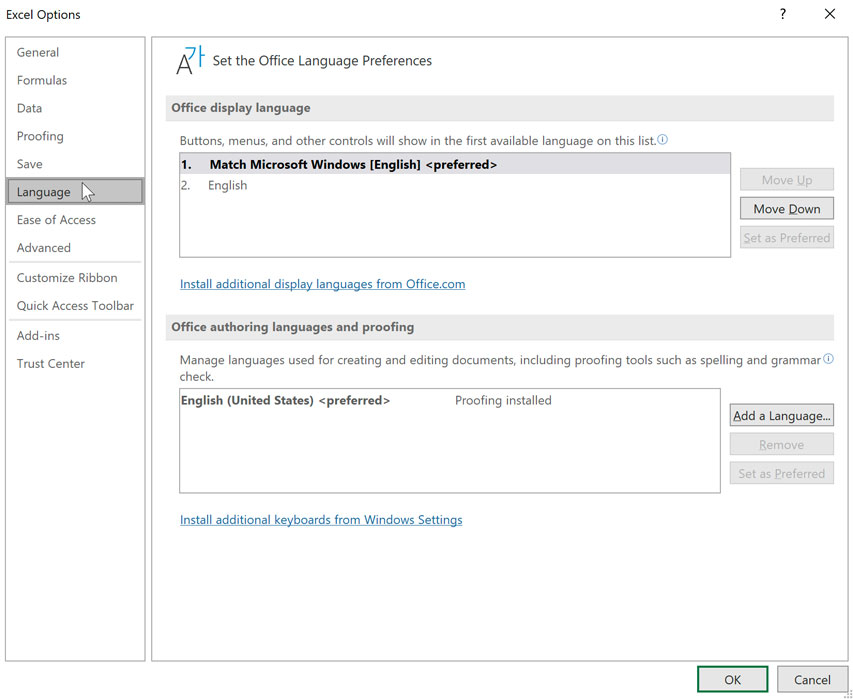 To view and modify date and number settings:

Unlike function names—which are determined by the language settings within Excel—your date and number settings are controlled by the operating system. Let's take a look at how to view and modify these settings in Windows.