Digital Photography: Getting to Know Your Camera

Lesson 2: Getting to Know Your Camera

Getting to know your camera 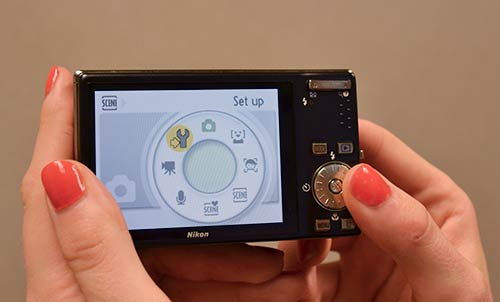 In order to take a photo, there are many different things your camera needs to take into account, such as focus and exposure. Most of the time, these things will be set automatically by your camera. However, you'll sometimes need to make manual changes to the settings to get the best possible photo.

The parts of a digital camera

Cameras come in many different shapes and sizes, so the exact buttons and features will vary. However, there are a few basic parts that almost all cameras have.

Click the buttons in the interactive below to learn about the basics parts of this compact camera: 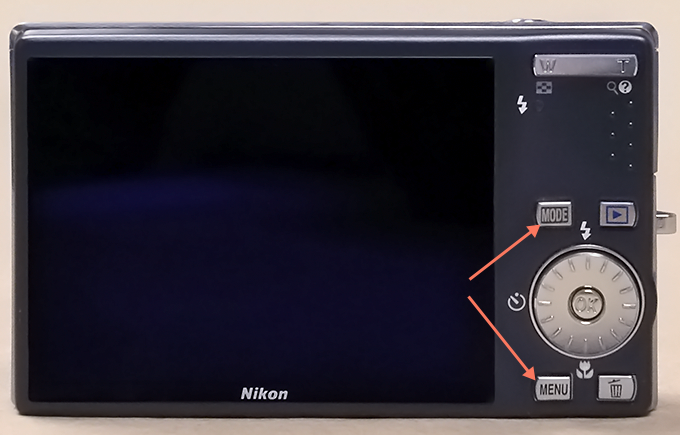 Your camera may have a Menu and/or Mode button. Press this button to change various settings on your camera. For example, you can use your camera's menus to switch to video mode or to select a scene mode.

Digital cameras have an LCD screen that you can use to frame your shot, view the photos you've taken, or navigate through your camera's menus.

When you're viewing a photo, you can press the Trash button to delete it.

You can press the Play button to view photos you've taken. While you're viewing photos, you can use the Zoom buttons to zoom in. This will allow you to see much more detail and determine whether your photos are in focus.

Many cameras have a scroll wheel that you can rotate to scroll through the photos you've taken, or to navigate through your camera's menu.

You can use these to zoom in or out before you take a photo. These buttons will often be marked W (wide) and T (tight). On some cameras, there will be a dial around the shutter that is used for zooming.

The Shutter button is the button that you press to take a photo. Most digital camera have a two-stage shutter button, which means you can press it halfway down (to lock in the focus or exposure) or all the way (to take a photo).

In the images below, you can see that the camera on the left has some additional buttons. Your camera may have a different layout, so you should consult your manual to learn about which buttons your camera has.

Buttons on a DSLR camera

Buttons on a point-and-shoot camera

Getting the right exposure

Every digital camera has a sensor located behind the lens. The sensor is the part that actually captures the photo, much like the roll of film in a film camera (except you'll never take the sensor out of the camera).

When you take a photo, the sensor is exposed to light for a fraction of a second, or sometimes longer. The total amount of light that is captured is called the exposure.

If the exposure isn't just right, your photo can come out too dark or too bright. Normally, your camera will handle the exposure automatically, although sometimes you will have to manually adjust the settings to get the desired result.

Whenever you take a photo, you'll want your subject to be in focus. This means your subject is sharp and not blurry.

If the focus is being handled automatically, your camera may try to focus on another object, which can cause your subject to be out of focus.

Your camera's LCD screen has a focus indicator, which is a box that shows what your camera is focusing on. To prevent focusing problems, you'll need to keep an eye on the focusing indicator whenever you take a photo. 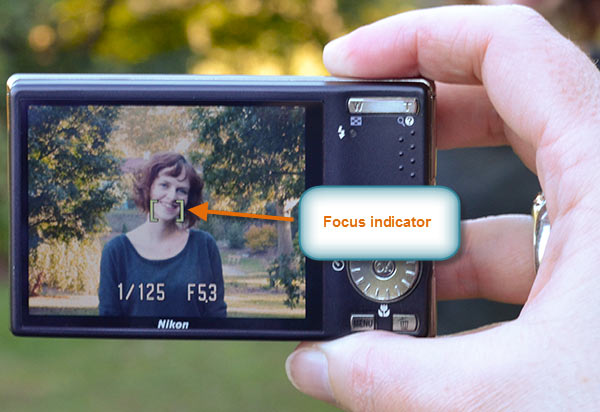 DSLR cameras show the auto-focus information in the viewfinder (the window above the LCD screen). They also give you the option of focusing manually, if you prefer.

The focal length is the distance between your camera’s sensor and the optical center of the camera lens. If you have a longer focal length, the overall perspective will be reduced, the subject will be closer, and areas won’t be as clear. The opposite is true for a shorter focal length. It will give a wider perspective and overall be more focused.

Most digital cameras have a two-stage shutter button, which means it can either be pressed halfway down or all the way down. When you press it halfway down, your camera will lock in the focus and exposure settings. After a second or so, the camera will beep to indicate that it is ready, and you can then press the shutter button the rest of the way down to take the photo.

If you simply press the shutter button down all at once, your camera won't have time to make adjustments, and your photo may come out blurry, too dark, or too light. Therefore, you should get in the habit of pressing it halfway down for every photo.

Many camera phones do not have a two-stage shutter button, so you may not have this option.

Although your camera is designed to work automatically, there are a few settings you may want to change depending on the situation. There will usually be an icon next to each button, and these icons are the same no matter what brand of camera you have.

Earlier, we talked about the importance of getting the right exposure. The exposure is actually controlled by three settings: shutter speed, aperture, and ISO. These settings work together to allow you to take photos in many different lighting situations, from bright sunlight to a dimly lit room.

Generally, your camera will set these automatically whenever you take a photo. However, as you'll see later on you can actually control these settings by adjusting the light or selecting a specific mode on your camera.

DSLR cameras give you much more manual control over the exposure, which is one reason they are commonly used by professionals. 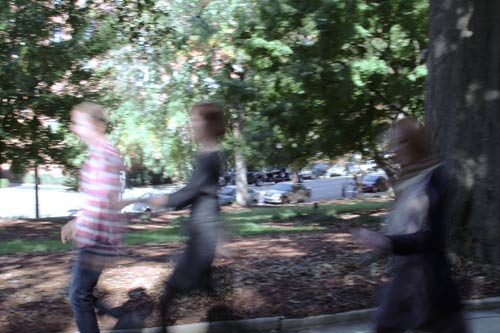 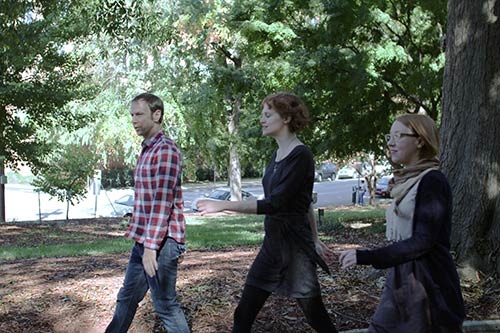 The aperture also has an interesting effect on how the light is focused. With a larger aperture, the background will blur, while the subject stays in focus. This is known as shallow depth of field. We'll talk more about depth of field on the next page. 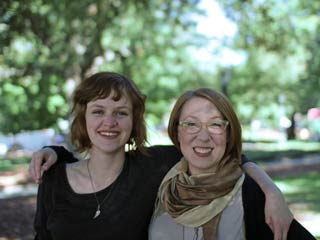 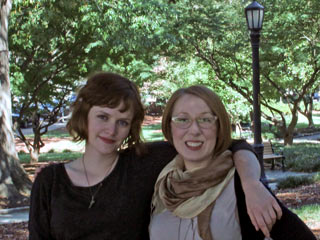 Digital cameras can adjust the sensitivity of the sensor, and this is known as the ISO number. For example, ISO 100 is a lower sensitivity, so it requires more light to create a good exposure. This generally means your camera will use a slower shutter speed and/or a wider aperture to gather more light. ISO 3200 is a higher sensitivity, so it can create a good exposure with less light. However, higher ISO numbers also add more image noise, which may make your photo too grainy. 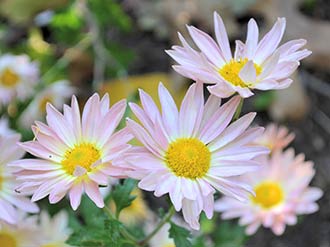 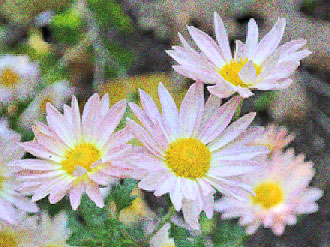 If you want to see how different shutter speeds, apertures, and ISO numbers affect your photos, you can try the SLR Camera Simulator.

In any photo you take, you'll want your subject to be in focus. However, sometimes you may want the background to be out of focus to give a soft, artistic appearance to the photo. This is known as shallow depth of field. With a shallow depth of field, you can still focus on your subject, but objects that are closer or farther away will be out of focus. If you are using a DSLR or bridge camera, you can get this effect by choosing a wide aperture (such as f/1.4).

In the photo below, the depth of field is shallow, completely blurring the background. 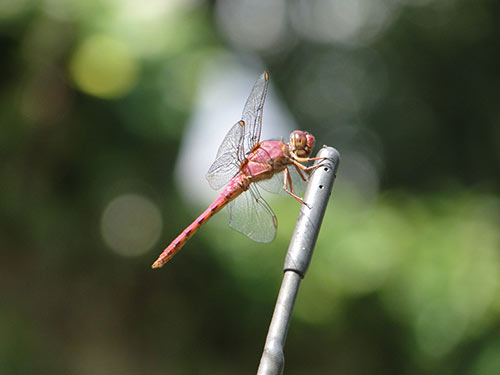 In the photo below, the depth of field is very deep, allowing the flowers and the mountains to be in focus (as well as everything in between). 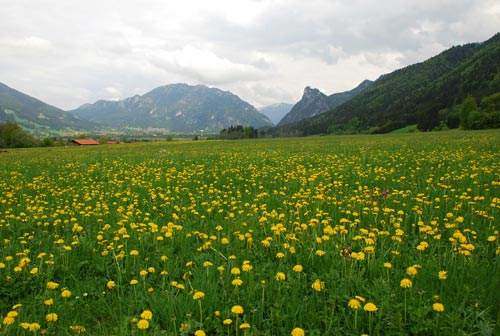 With a point-and-shoot camera, you won't have as much control over the aperture, so it may be difficult to get a shallow depth of field. If you want to get a shallower depth of field, you can zoom in or move closer to your subject. However, if you really want to experiment with different depths of field and have more creative control over your photos, you will usually need to use a DSLR or bridge camera.

Many cameras include presets called scene modes, which you can access from your camera's menus or from a dial at the top. Each scene mode is geared toward a specific situation (or scene). For example, the Sports scene mode will use a faster shutter speed, and it may also use motion detection to help reduce blur. On the other hand, the Portrait scene mode is designed to easily focus on your subject, and it also adjusts the color balance so skin tones look as natural as possible. 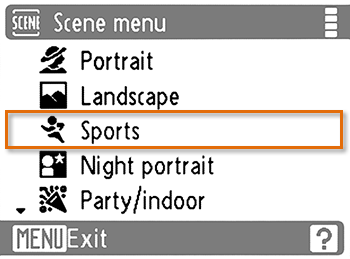 If you don't use a scene mode, your camera will still make automatic adjustments to try to make the photo look good. However, scene modes are a great way to take more successful photos, so it's a good idea to use them as much as possible.