Lesson 7: Organization and Sizing in CSS

Organization and Sizing in CSS

On most webpages, one of the first things you'll want to do is create a customized layout. Fortunately, CSS provides declarations to help you alter the basic organization of your HTML elements on the page, as well as the sizes of each element. 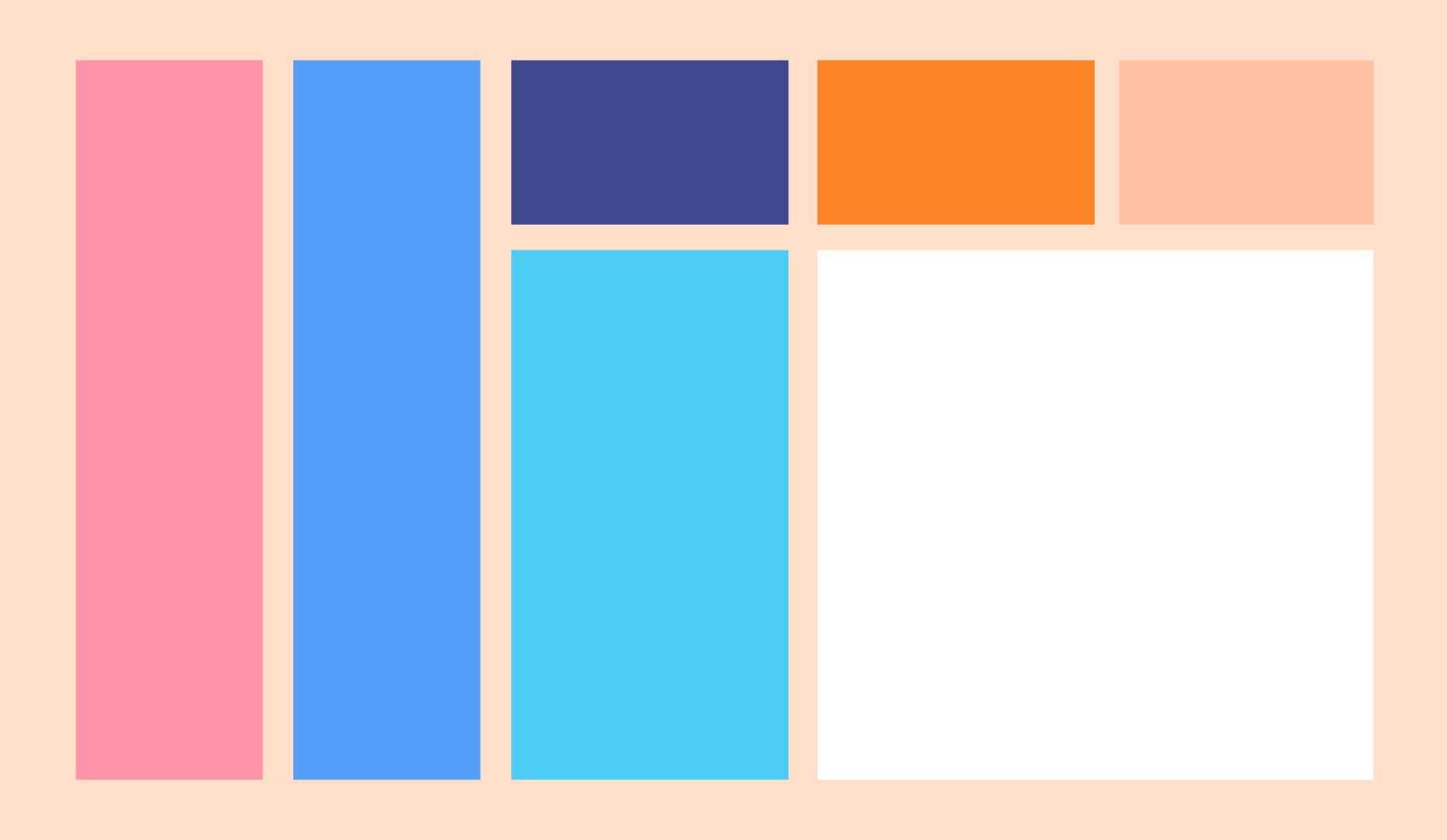 With the display CSS declaration, you can change those default values. For example, imagine that you wanted to make a list of links to your favorite websites. First, you might put together a few <a> elements:

If you were to load that on a webpage, you'd see a series of links all in a single row:

Maybe you want to stack them vertically, though, so that it looks more like a list. To do that, you could leave the HTML exactly as it is, but create a ruleset that uses the display declaration to change the default behavior of the <a> element to block.

Now that webpage would show a series of vertically stacked links:

Another powerful function of the display declaration is the ability to hide elements altogether. By giving the declaration a value of none, you can keep elements from being visible or taking up any space on the screen when you load them on a webpage. Elements that have been set to display: none; are still there—if you were to view the page source or use your browser's inspector tool, you'd be able to find them—but in the visible display of the webpage, they're gone.

The value of being able to hide elements with CSS will become much more apparent once you begin working with JavaScript. For now, just keep in mind that there is sometimes more HTML than you realize on any given webpage, because CSS can be used to hide it from sight.

To better control your webpage's layout, you need to be able to alter the sizes of your HTML elements as well. There are multiple ways to do so—some we'll get to later on—but two of the most straightforward methods involve directly changing width and height.

Every HTML element has a certain width by default, depending on the display type of the element. For example, a <p> element is a block-level element, so by default, it will take up all the width available to it. An <a> element, on the other hand, is inline, so it has a flexible width and only takes up the space necessary to show the text inside.

Imagine that you have a <p> element on a webpage. Let's pretend you've given it a background-color CSS declaration of lightblue as well, just to make it easier to see. By default, your <p> element would take up all of the width available to it, like so:

However, you could also tell it how much horizontal space to take up by using the width declaration. For example, let's say you added width to your existing ruleset:

Now you have the same p element with the same contents, but only taking up 200px of horizontal space, rather than all the available space.

Because inline elements are meant to flow seamlessly within a single line, sizing declarations for width and height don't work on them as they do with block-level elements. However, keep in mind that the display declaration allows you to change that status on any given element.

While the width declaration allows you to set a specific width for an HTML element, the height declaration does the same for height. It uses the same values as width—pixels (px) or percentages (%), for example—but is noticeably different in its default behaviors. Whether an element is block-level or inline, its default height is determined only by the height of its contents.

For example, imagine you're working on some sort of blog post. You've already got a couple of paragraphs in place:

Now imagine you wanted to put a divider between those paragraphs, given that you know how to add colors. Maybe something like this:

One solution would be to add a background-color declaration to a <div> element with nothing in it. It doesn't have any text content, after all; it just needs to take up space. If you add an empty <div> element between the two paragraphs and give it a background color, you still won't see anything on the page, though.

That's because this particular <div> doesn't contain anything. Its default height wants to match its contents, and it doesn't have any contents, so its height is nothing. All we have to do, then, is give that <div> a height value:

And now your divider will have some weight to it:

Try adding each of these declarations to the input below:

The selector for the ruleset is already defined for you, and targets the paragraph to its right. Once you've tried those declarations, try changing some of the values yourself.  For example, try making the width or height significantly bigger or smaller (don't forget to include the "px") and see what happens.

Once you've played around with it a bit, try adding this in addition to the ones above:

To demonstrate the utility of all of these organizational and sizing declarations, we're going to have to return to your HTML again first. Open the index.html file in your GCF Programming Tutorials project in your text editor. It wouldn't be a movie review website if it only had one review, so let's add a couple of extras.

If you were to load your webpage in the browser now, you'd see a fairly cluttered page with three reviews all on top of each other. However, we now have some tools to clean it up a bit, so let's head back to your CSS. Open the styles.html file in your GCF Programming Tutorials project in your text editor.

Your full styles.css file should now look like this:

And if you load your index.html file in your browser or refresh the page, you should now see something more like this.

Congratulations, you have organized and resized your HTML using CSS!