Lesson 1: Getting Started with Google Hangouts

Getting started with Google Hangouts

Google Hangouts is a free service from Google that allows you to talk to family and friends on your computer or mobile device. You can even talk to each other live over video chat and use Hangouts to make phone calls and texts. It's available on its website, as an app for iOS and Android, and as a plug-in for various web browsers.

Watch this video from Google to learn more about Google Hangouts.

As with most of Google's services, almost all of Google Hangouts is completely free to use. However, using Google Hangouts to call a phone number outside of the United States and Canada does have a cost-per-minute rate. You can use this international calling rate calculator provided by Google to estimate how much a phone call might cost.

After signing in with your Google account, you'll need to open Hangouts itself. Google Hangouts is available on a variety of platforms and devices. Below, we've listed the ways to access and open it.

When you first open Google Hangouts, things will look pretty empty, but that's only because you haven't chatted with anyone yet. The interface is relatively easy to use and gives you access to all kinds of things, including your contact list, recent conversations, and settings.

Click the buttons in the interactive below to become more familiar with the Google Hangouts interface. 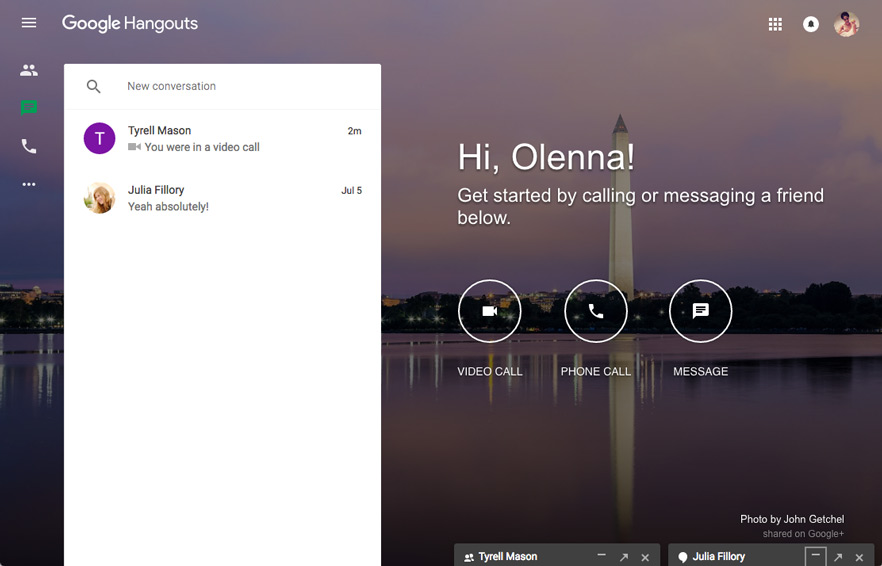 Click the Message button to view your recent messages in the Hangouts list and start a text conversation with someone.

At the bottom of the screen are the conversations you are currently having. In this screenshot, they're minimized. Simply click the tab you want to view to reopen it and display your conversation.

Click the Contacts tab to display all of the contacts you've previously spoken with in the Hangouts list.

Click the Settings button to open a menu pane. From here, you can open your settings and change notification settings, customize your experience, and choose how you'd like to appear to others when you're online.

In the Hangouts list, you'll find all of your recent conversations or calls, depending on which tab you have open.

In the search bar, you can search for names, email addresses, and phone numbers of the people you'd like to talk to.

Click the Video Call button to open the video call interface in a new window.

Click the Phone Calls tab to display all of your recent phone calls in the Hangouts list.

Click the Menu button to open a menu pane, which allows you to change between conversation types an open Hangouts settings.